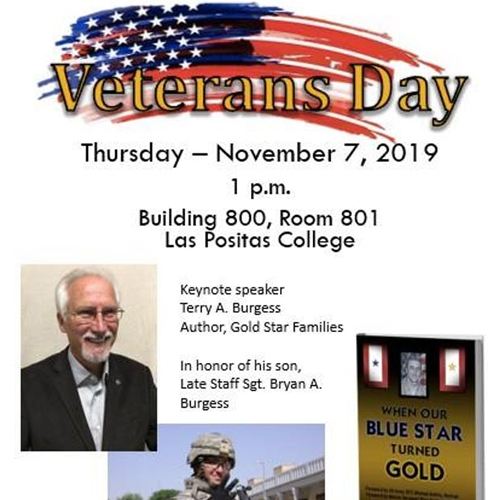 Starts at 10 AM with a landing of a Huey Helicopter

Las Positas College in Livermore is proud to honor veterans by landing a Huey helicopter on campus in Parking Lot B. At 10:00 AM, the National Anthem will be performed with a Presentation of Colors. A free lunch for veterans will be provided at noon.

Event is followed by book signing “When Blue Star Turned Gold.” Gold Star Dad Burgess shared that during his son, Staff Sgt. Burgess received numerous awards and decorations including: The Army Commendation Medal, Army Achievement Medal and the National Defense Service Medal. Those awards are just confirmation for a father who calls his son the ultimate role model. “We live each day in the hope of honoring our son in such a way that he would be as proud of us as we are of him. Our path has led us to the mission of helping other Gold Star families learn about the resources available to share their stories and honor their own fallen heroes.” (Burgess)