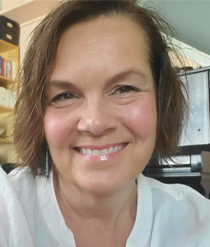 Savanna grew up in the Midwest, traveled the world with her family at a young age, and learned a love of travel, appreciating new cultures and making new contacts. She studied at the University of Iowa, earning a Bachelor's and Master's Degree in French Literature. Savanna lived in France twice, once in Pau, and later in Rennes. She has been the lead French Instructor at Las Positas College since 2004.