These specimens are all from the Sierra Nevada, Northern and Central California. 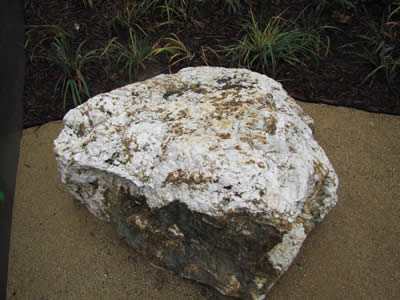 Quartz is a mineral that can be almost any color, based on small amounts of impurities. This example is milky quartz, which is opaque white due to numerous bubbles of gas and liquid trapped in the molecular structure. Quartz is a common silicate, estimated to comprise 12% of the earth's crust by volume. It has a hardness of 7, and can be used for jewelry, sandpaper, even the small windows in deep diving submersibles. Amethyst is purple quartz (due to trace amounts of iron), rose quartz is pink, ( due to trace amounts of manganese or titanium) and citrine is yellow quartz ( due to colloidal iron hydrates.)

Granite is an intrusive igneous rock. It formed down deep in the Earth, cooling slowly and developing large crystals of quartz, feldspars, and micas. It is sialic meaning light colored, and high in aluminum and silicon. It is the dominant rock of the Sierras, with several varieties ( tonalite, granodiorite) found. In the Sierras, huge batholiths (magma chambers) of ancient volcanoes have been uplifted by plate tectonics, and the covering rock eroded off, exposing these hearts of the volcanoes. Exfoliation domes are common, which show layers of the granite 'peeling' like an onion due to the reduced pressure allowing expansion of the rock. Below is a microscope slide showing how all the crystals are intergrown in granite. The granite rock photo is below that.

Basalt is black lava rock, such as one sees forming the land in Hawaii. It is mafic, dark colored because of high amounts of iron and magnesium. This pillar shape is a naturally occuring product of how it cools. In California one can see these hexagonal pillars at Devil's Postpile. Basalt is cooled quickly at the Earth's surface (extrusive) ,so the crystals are very small. Because basalt lava originates in the Earth's mantle, occasionally one can find small green crystals of olivine (Peridot) embedded in it that were carried up from deep down.

Rhyolite is a light colored ( sialic ) lava rock from volcanoes such as those in the Cascade range, including Mt. Shasta. It cools quickly at the Earth's surface, and so has tiny crystals. Some rhyolite is porphyritic meaning it also contains some larger crystals. Rhyolite has the same chemistry as granite, and can range from grey to tan to pink in color. The lava it forms from is thick and pasty, and so most rhyolite does not 'flow' like basaltic lavas do. Rhyolitic volcanoes can be explosive due to the resistance of the viscous lava, like happened in 1980 at Mt. St. Helens in Washington state. 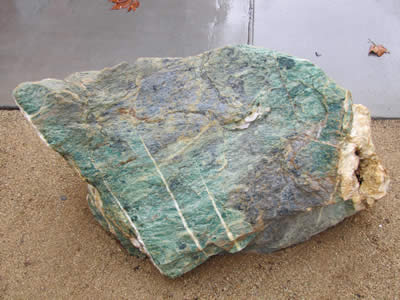 This is a beautiful California rock, rarely found elsewhere. Mariposite is a green chromium-bearing variety of mica. It was first described in 1868 from the Mother Lode country of California, where it is associated with gold-bearing quartz veins. It is closely related to fuchsite and muscovite micas. Mariposite is used for jewelry and landscaping features. Look closely with your magnifier, and you may spot some gold colored flecks of either pyrite ( Fool's gold) or actual gold. 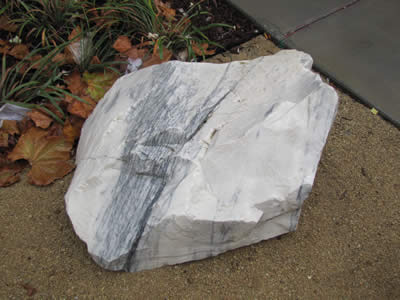 Marble is created when limestone (calcium carbonate) is heated and recrystallized during metamorphic processes. It can be almost any color including pink, tan, white, green, red and brown. It reacts to weak hydrochloric acid, releasing Carbon dioxide. The crystals are large enough to see easily, with shiny faces, unlike limestone, which is dull in luster. This sample has medium sized crystals. Marble is commonly used as a facing on buildings, and as the raw material for statuary. Some marble has a lovely pattern of veins in it. 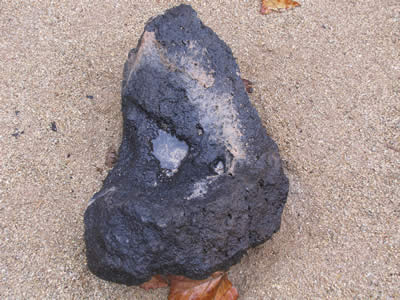 Scoria is another name for vesicular basalt. Vesicles are the gas bubble holes one can see in this sample. As the hot lava was reaching the Earth's surface, some gas escaped but a lot did not, leaving behind the cooled vesicles like blisters in the rock. Scoria looks like a sponge,but is still less than 50% vesicles. It does not float, unlike pumice. It is commonly used in front yards as a decorative feature, appearing red due to being oxidized; rusted. 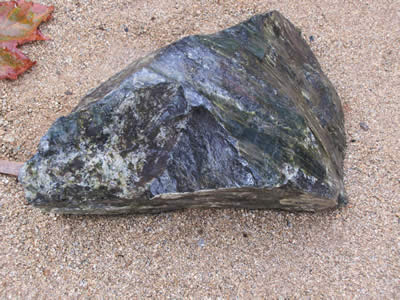 Serpentine is an ultramafic (very high in iron and magnesium) greenish, metamorphic, shiny rock with an unusual characteristic. It is uniquely smooth, and has a feel called 'Slickensides.' It is present in many California hillsides, and due to its slippery surface, increases the risk of landslides. It is formed often from ocean floor rocks that get altered in California's many faults. This is by low temperature high pressure metamorphism in the presence of water. It is also found worldwide in other places with mountain building, including the Himalayas. As it degrades at the Earth's surface, serpentine can release talc, and asbestos. 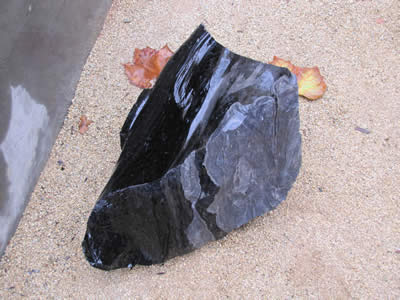 Volcanic glass is a uniquely beautiful extrusive igneous product. Since it has no crystals it is not technically a rock, but is referred to as one. It has conchoidal fracture which means it shows a curved shell shaped pattern where broken. Obsidian is formed when lava cools so fast at the Earth's surface that no crystals can form. In Hawaii there is a form of basalt called Shelly Pahoehoe because the outside layer of the cooled lava is glassy. In California the map below shows places with large obsidian flows that you can visit.

is our newest sample, donated by Andrew Alden of Aboutgeology.com. This is a dense beautiful sample of Blueschist, a rock common to our Bay Area hills.It is colored by the presence of a blue mineral, glaucophane. it forms in the faults of the San Andreas system under low temperature high pressure metamorphism.To see blueschist in the field, go to Little Yosemite at Sunol Regional park, and look at the gorgeous blue stones in the creek bed. Best appreciated on a sunny day with good waterflow in the creek.