Academic essays ususally have a thesis statement, a one- or two-sentence summary of a paper’s main point, usually found at the end of the introduction. This page includes thesis statement dos and don'ts and a strategy for creating strong thesis statements. It also discusses how to write thesis statements for personal essays and essays about literature. 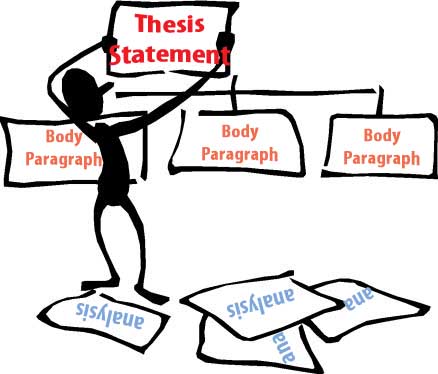 DON'T be vague or mysterious. Vague language talks about something without directly saying what it is. Some students believe that their thesis statement should be vague so it doesn't give the argument away. In fact, your thesis statement is supposed to give the argument away--that's its job! Without a clear idea where your paper is going, it is difficult for readers to follow your points as you make them in the paper.

This essay will give my reaction to Al Gore's view of global warming.

DO be as specific as possible about what your paper will argue.

While Al Gore does provide some strong evidence for global warming, he relies too heavily on scaring his audience, which weakens his argument.

DON'T list the topic of each body paragraph (unless the assignment instructs you to do so). One strategy commonly taught to beginning writers is to list the topic of each body paragraph in the thesis statement. While this is a good way to learn the principles of organization, it has a few problems. One is that it doesn't lead to a complex main point for your paper. Also, it only works for a short paper--imagine writing this type of thesis statement for a ten or twenty-page paper! For this reason, you should avoid listing the body paragraphs in your thesis statement unless the assignment or your teacher has told you to do so. For example, in the following thesis statement, the listing structure makes the essay's main point difficult to identify. Can you tell what this essay will argue?

The play Macbeth shows that men and women differ in emotionalism, loyalty, and the way they deal with guilty feelings.

DO explain the larger topic of the entire essay in your thesis statement.

The differences between Lady and Lord Macbeth's reactions to Duncan's murder demonstrate Shakespeare's view that men are more simplistic and straightforward than women.

Exception: a listing thesis statement can work well if your main point truly is a list.

DON'T squish too many ideas into a single sentence. Students are often taught that a thesis statement should only be one sentence in length. While one sentence is often ideal, it is undesirable to have an incredibly long, complicated sentence that will confuse your reader.

The formula below is one useful way to create a thesis statement. It also works strongly for topic sentences (opening sentences of a body paragraph).

Combining these two elements gives you the most important elements for a thesis statement. The analysis is argumentative and debatable, while the observation gives evidence or reasoning to support the analysis.

As you might imagine, the dividing line between what counts as an observation and what is an analysis is not clear-cut. Often it will depend on context, such as the assignment, the field of study, and your audience. For example, in a biology class, the statement, "People are descended from other animals similar to apes," would be an observation; all biology teachers would agree with you and this statement would be considered a fact. In a religious philosophy class, the same statement might be up for debate, in which case it would be an analysis, which would need a more agreed-upon observation to support it.

In most cases, though, the distinction is fairly clear. Below are some examples.

Observations (Statements most readers would agree with)

Analyses (Statements that many readers would disagree with)

The popularity of reality shows causes young Americans to have unrealistic expectations that their own lives should always be exciting and dramatic.

Because readers are free to make up their own descriptions in their heads, Hemingway's avoidance of adjectives actually makes his writing more vivid and imaginative.

The reports of 500,000 preventable deaths each year lead me to agree with the American Lung association that the U.S. government should outlaw smoking.

Personal Essays and Essays about Literature

Many types of essays, such as personal essays and essays about literature, do not always have a debatable main point, but they can still have an observation and analysis. Below are some guidelines for these types of esssays.

Your observation will probably be the experience you wish to discuss, while your anaysis will be what you learned from it or what you would like to say about it.

(Notice that even though the last two are not necessarily debatable arguments, they are still argumentative statements).

My experiences going to schools in poor and wealthy neighborhoods convinced me that the government must do more to provide equal opportunities for all students, both rich and poor.

People should learn to be kinder to those with disabilities, as I learned from growing up with an autistic sister.

My algebra teacher was one of the most influential people in my life, since she taught me that I could do anything I set my mind to.

Your observation will probably be some event, description, or pattern that you noticed in the text, and your analysis will be your interpretation of that event.

(Notice that even though these arent' debatable issues, they are still argumentative interpretations; someone else might interpret the same features of the text in a very different way).

The repetitive rhyme scheme and fairy-tale imagery of Sylvia Plath's poem "Daddy" reflect the perspective of an angry child rather than a mature adult.

The focus on female characters and female spaces in "Trifles" suggsets that women's perspectives can be more valuable than men's.

The negative outcomes listed in "A Dream Deferred" suggest that dealing with oppression can lead to violence against oneself or others.

The disruptive elements of Slaughterhouse Five, including time travel and outer-space travel, make readers more critical of the war experiences he describes.