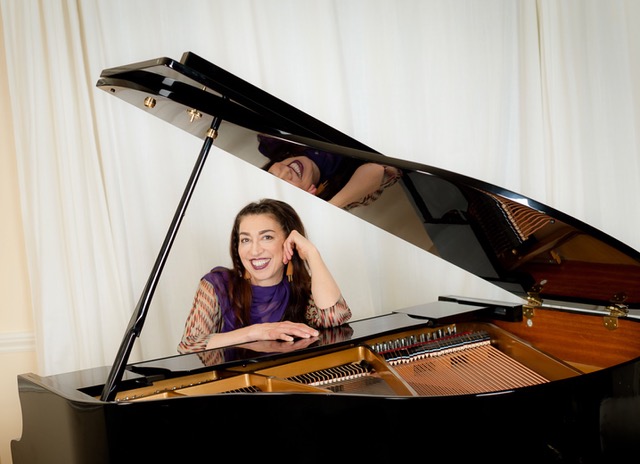 Born in London, England and raised in the American Midwest, Julie Homi began playing the piano at the age of five. She composed classical duets to play with her amateur violinist father and, encouraged by her actor/director mother, wrote book, music and lyrics to a children’s’ musical at age ten.

In the commercial music world, Julie played keyboards on Robert Palmer’s Addicted to Love tour, was featured on the quadruple-platinum DVD Yanni Live at the Acropolis and has toured as a keyboardist/ back-up vocalist with artists including Tracy Chapman, Peter Cetera and Shirley Bassey. She has also performed with Bay Area musical luminaries such as Holly Near, Maria Muldaur and Linda Tillery.

After many years of touring, Julie completed her education, earning a BA in music composition at Columbia College Chicago, an MA in composition & theory at Mills College, and a MLIS at San Jose State University with an emphasis on music librarianship. She taught piano, theory and music appreciation classes at Solano and Napa Valley Colleges.

Pulled back into the musical theatre world she had loved as a child, Julie played keyboards on the original San Francisco engagements of The Lion King and Mamma Mia and worked with regional companies A.C.T., San Jose Rep., Berkeley Rep. and Theatreworks. Julie returned to the road as keyboardist/back-up vocalist for the hit show Jersey Boys, which led to touring as Associate Music Director for the national tours of Dirty Dancing and School of Rock.

Retiring from the road once again, Julie joined the Diablo Valley College music department as an adjunct in January 2020 and is thrilled to begin teaching at Las Positas College this fall.